You are here: Home / Events / The Truffle Fair of Moncalvo 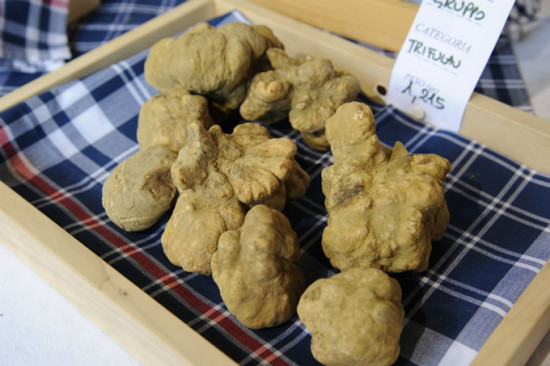 The white truffle exhibition is one of the most important appointments (together with the Bue Grasso fair) and pride of Moncalvo, the small city situated on the hill in front of Cascina rosa b&b. Appointments are the last two Sundays in October in the main square of Moncalvo with food stands, theater dialect, art exhibits and more.

After a nice long summer in Monferrato that often extends into the early weeks of October, the autumn comes, and with that many food and wine events in the area. This is the best opportunity for a visit to Cascina rosa b&b if you love italian food and want to try the specialities of Monferrato: few days relaxing and tasting good food, surrounded by Barbera and Grignolino vineyards on our sweet hills.

The Truffle Fair of Moncalvo, refers to the historic tradition of the Fair which dates back to the fourteenth century, when the truffle of Moncalvo was official ambassador of the lands of Monferrato at all the European courts.

The truffle hunter with his dog, illustration with dialect names

The Fair began as an idea, in Moncalvo when, at the beginning of the last century of the millennium, the owner of an inn where the truffle seekers (trifulau) were used to meet the Thursday of each week for the market, being an admirer and connoisseur of fine truffles , organized in fact the first exhibition contest. By choosing a jury from the “trifulau” themselves, did examine the specimens, kept in traditional cotton handkerchiefs to broad blue, then rewarded the most beautiful individually, and the most abundant group.

The Moncalvo Truffle Fair is now a reality with strong roots … and during the festival gather the essential protagonists of the festival: the truffle hunters, seekers of trifole with cap or hat, hoe and stick, muddy boots and a lantern, have come their mysterious trails through oak, hazel, poplar and linden in search of the fragrant tuber. Invariably accompanied by tabui, the faithful hound.

We remember you that although the Truffle Fair of Moncalvo takes place only in two Sundays, it marks the start of the season of the precious tuber and if you are interested in tasting it during a stay at Cascina rosa b&b do not hesitate to report it during the booking !

We will be happy to recommend the best local restaurants where you can satisfy your palate with dishes of raw meat Fassone Piemontese or the famous tajarin combined with refined taste of truffles from Monferrato, the fruit of our hills.

This website uses cookies to improve your experience while you navigate through the website. Out of these, the cookies that are categorized as necessary are stored on your browser as they are essential for the working of basic functionalities of the website. We also use third-party cookies that help us analyze and understand how you use this website. These cookies will be stored in your browser only with your consent. You also have the option to opt-out of these cookies. But opting out of some of these cookies may affect your browsing experience.
Necessary Sempre abilitato
Necessary cookies are absolutely essential for the website to function properly. This category only includes cookies that ensures basic functionalities and security features of the website. These cookies do not store any personal information.
Non-necessary
Any cookies that may not be particularly necessary for the website to function and is used specifically to collect user personal data via analytics, ads, other embedded contents are termed as non-necessary cookies. It is mandatory to procure user consent prior to running these cookies on your website.
ACCETTA E SALVA