You are here: Home / Surroundings / The “Fassone” of Piedmont and the Piemontese Breed

The Fassone comes from the Piemontese breed, the most important Italian local breed: the cattle, all strictly born and bred in Italy give a top-quality meat, tender and lean.

The legend of the Piemontese Breed

It comes from the Professor Maletto the fascinating theory that finds in a bovine from Pleistocene (aurochs) one of the progenitors Piemontese Breed. According to Maletto, the aurochs, who lived in a geographically isolated area, which corresponds to the actual Piedmont, maintained a relative genetic purity thanks to the barrier represented by the Alpine mountains, adapting its characteristics to that environment.

In a period between the Middle and Upper Paleolithic (25-30,000 years ago), for unknown reasons, in the lands where the aurochs was widespread, there was a massive migration of Zebù from the Indian subcontinent (modern western Pakistan), which quickly occupied various parts of the European continent. Because of the natural barrier formed by the Alps, gradually the two populations of aurochs and Zebù merged, giving rise to a breed with the characteristics of Piemontese.

The history of the Fassone Piemontese 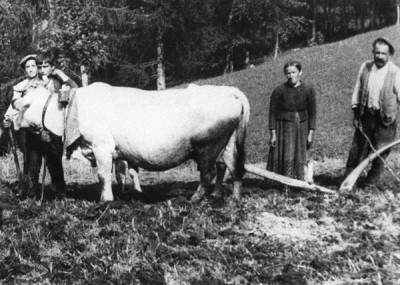 The history of Fassone Piemontese

While the legendary origins of the Razza Piemontese are being challenged by recent DNA analysis that seem to suggest an evolution from Alpine cattle strains, the recent history of the Fassone is well known.

Everything begins with a natural mutation occurred on a Piemontese cow in Guarene d’Alba in 1886. In Borgata Bassi, Frazione Forcellini there was the first report of calves with an exceptional muscular development, especially in the thigh, which is the basis of the character “double-muscled “, the muscle hypertrophy of the Fassone Piemontese. Initially the “thigh” bulls of Piemontese were viewed with suspicion and even the Ministry of Agriculture ordered the mass castration of all the “thigh” bulls. However, thanks to the paesant wisdom, farmers cultivated this character and, gradually, also changed the negative opinion of the technicians.

The muscle hypertrophy and myostatin

The phenomenon “thigh” or “double-muscled” is one of the distinctive somatic features of the Fassone Piemontese. It is an hypertrophy – or hyperplasia –  of the thigh muscles, due to natural genetic mutation of a specific gene on chromosome 2, called myostatin gene and usually referred to as MH (muscular hypertrophy). Myostatin is a protein that regulates muscle development. The mutation occurred makes that it is produced less than it should, so the muscles, less inhibited in the development of myostatin, are free to grow, becoming hypertrophic.

The Italian breed: work, milk and meat of the highest quality

First working in the fields, then the milking to produce typical cheeses, finally only more meat of the highest quality. In short this was the evolution of the Razza Piemontese for the last 150 years.

Today, the Piedmontese Breed called “Fassone” (from the French façon which means “way”) produces a high level of meat: tender, lean and low in fat but high nutritional quality (unsaturated fatty acids, omega-3 and omega-6) and a very low cholesterol level (just think that does not exceed that found in most fish, 48-60 mg / 100g depending on the cuts).

If a common rule states that the meat is more fat, the more it is tender, this does not apply to the meat Fassone Piemontese: cuts containing less than 3% fat have been proven far more tender of the same from other breeds containing more than 7 % of fat (test Warner-Bratzler).

The Piemontese is the Italian breed for excellence, and is a native breed. This means that all bovine animals are born and raised in Italy.

Today it is estimated that only 6% of the meat consumed in this country originates from cattle with the same or similar requirements (beef breed and raised in Italy).

It is most important know what you eat, discover the specialities and in cases like these, appreciate the real excellences like the Fassone Piemontese and farmers who, with passion, hard work and respect for the animal are carrying on this tradition of Piedmont.

At Cascina rosa b&b we care about this, and on the hill in front of the b&b, in the town of Moncalvo (town of Fat Ox Fair and White Truffle Fair) there is the farm of Micco brothers: example of how the attention to quality, authenticity, sustainability and short chain are reconciled and are expressed in a final product of the highest quality.

This website uses cookies to improve your experience while you navigate through the website. Out of these, the cookies that are categorized as necessary are stored on your browser as they are essential for the working of basic functionalities of the website. We also use third-party cookies that help us analyze and understand how you use this website. These cookies will be stored in your browser only with your consent. You also have the option to opt-out of these cookies. But opting out of some of these cookies may affect your browsing experience.
Necessary Sempre abilitato
Necessary cookies are absolutely essential for the website to function properly. This category only includes cookies that ensures basic functionalities and security features of the website. These cookies do not store any personal information.
Non-necessary
Any cookies that may not be particularly necessary for the website to function and is used specifically to collect user personal data via analytics, ads, other embedded contents are termed as non-necessary cookies. It is mandatory to procure user consent prior to running these cookies on your website.
ACCETTA E SALVA